The figure turned, blue light from the monitors glaring off his metallic helmet. The man who had approached him trembled as the eyes he could not see bore into his thoughts. Swallowing, he shuffled his feet on the metal floor and began to sweat. He delivered his message hurriedly, the words falling out of his mouth one after the other like a chain tumbling from a platform.

“We have no confirmation,” he said, voice breaking. “But we believe FN-2187 may have helped in the escape—”

Ren’s saber extended in a explosion of red flame. The man flinched, bracing himself for the impact of searing plasma. He heard the saber’s shrill hum as it sliced and crackled through the air – but the saber did not hit him. Ren attacked the console in a frenzy. The slashes fell at random, sometimes slicing gracefully through, sometimes stopping abruptly on a denser piece of metal. When this happened, the leader of the Knights of Ren wielded his weapon like a club, hacking and beating the console to a burning mass of scrap. Bits of sparks and liquefied metal landed on the messenger’s clothing and sent up tiny tendrils of smoke. He wanted to escape, to flee the room screaming, to hop into and escape pod and run back to his parents on Coruscant—but the man was too afraid to move.

Ren’s movements slowed. He hacked at the console once more, sending an arc of sparks streaming across the room. He panted heavily for a few moments before sheathing his saber. He turned to face the man again.

“Anything else?” he asked calmly.

Mind racing, the man stammered: “The two were accompanied by a girl.”

The messenger flew toward Ren’s outstretched hand, shoes clattering against the floor, eyes wide with terror. He felt the impact of the glove, and cold fingers tightened around his throat.

“What girl?” Ren said. There was a coldness in the voice that the mask could not account for.

What is this Prompt?

In his book Image Grammar, Harry Noden compares writing to filming scenes in a movie. He says:

A well-described fiction or nonfiction work creates the mental equivalent of a film, leading readers through a visual journey of endless images with close-ups, action scenes, and angle shots. (4)”

In this metaphor, a comma “…controls a telescopic lens that zooms in on images. (6)” We wanted to play with this idea in my creative writing class as we focused on his first two “brushstrokes,” which are participles and absolutes. (If you’re not sure what those are, that’s okay: I will include a brief explanation later on in this post.) To do this, we looked up a clip from one of our favorite movies or TV shows and translated the action into prose. I figured if we need to think about writing as framing shots of a movie, why not practice by turning a clip from a movie into writing?

This is a pretty straightforward exercise that gives you an outline on which you can paint your prose. You can make it as spicy or as plain as you want, and in reality you could practice any skill you’ve been wanting to work on. I liked this activity because it lets you focus on the writing itself, whereas trying to practice skills and create a story at the same time splits your attention.

Even if you’re not practicing a certain skill though, it’s pretty fun to narrate a scene from your favorite shows.

Give it a shot!

Basically, a participle is an “-ing” word that is acting like an adjective (describing a noun). In the following example from my post, the verb swallow is being used to add to the image of the man.

Swallowing, he shuffled his feet…

Swallowing is a participle, a verb-turned-adjective that happens at the same time as the other action in the sentence. An absolute is a similar, but it’s a noun+participle combo that adds another image to the sentence rather than just describing the subject. In other words, the participle focuses the image, but the absolute zooms in on another part of the subject.

The messenger flew toward Ren’s outstretched hand, shoes clattering against the floor

“The messenger” is the subject of this shot. That’s who we’re focusing on here, but in this scene there’s actually a point where the camera does a close-up on his shoes (I could not find a clip that showed this whole scene for some reason, but go watch it, it’s there!). The absolute phrase “shoes clattering against the floor” achieves the same effect in prose that the zoom achieves in the clip.

There is lots of good information on the web about these first two brushstrokes, but here is a google slides presentation I put together to help explain them to my 11th graders. 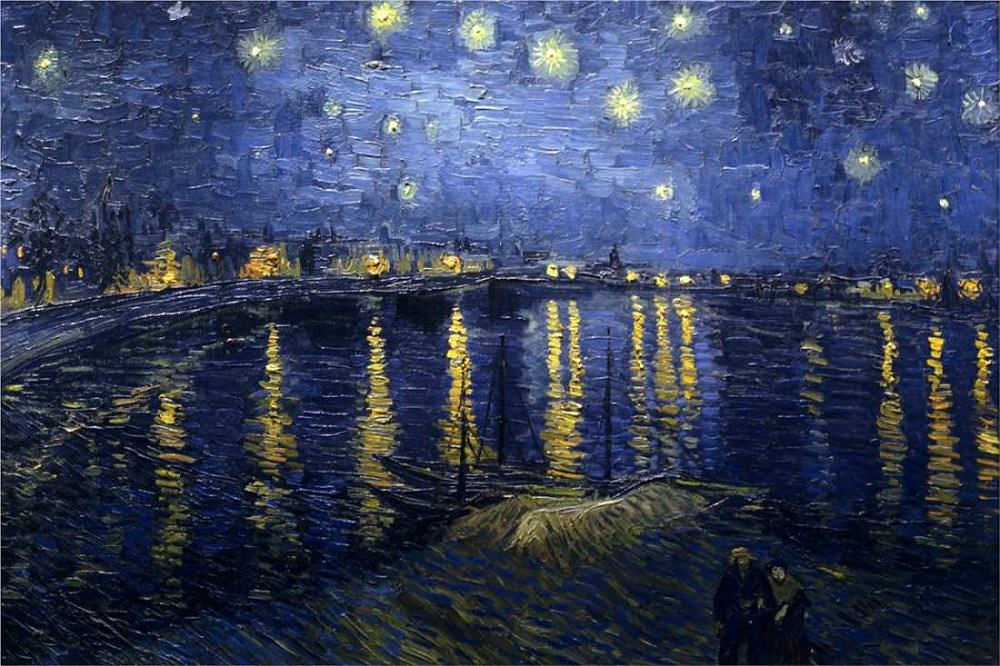 I stopped at the end of the pier and gazed out across the bay.  A warm, salty wind whipped through my hair.  The sun had bowed out behind curtain of stars not more than an hour before, but the sky was still bright with lights, echoing the warm welcome of the air. Across the water were lamps from houses and shops that reached out in contrast over the deep and colored it with yellow swatches that moved like brush strokes across the water.  The stars shone out above and beneath the strokes in an arch that stretched from the sea to the sky in a blue mirror that was unbroken save for the motion of  the waves.
A briny gust from the sea whipped my hair about my head. Suddenly, I did not feel so alone. I closed my eyes and smiled, drinking it all in.  I listened to the fluttering of the breeze and the banging of the boats tied together against the dock.  I listened to the breathing of the ocean as the waves washed up and down the shoreline.  I heard the old wooden pier creek in protest against the battering waves, and felt it sway ever so slightly from side to side.
There was some magic in the atmosphere, and I spread my arms wide and laughed aloud to greet it. I looked around me for someone to share the moment with. I saw no one – till the sound of talking drew my gaze back down to the beach. A man and a woman were walking toward the dock arm in arm. She leaned on his shoulder and closed her eyes. He pressed his cheek against her forehead as they walked. I almost called out to them, but something held me back.

Realizing what that something was, I scanned the horizon one last time and inhaled deeply, then turned and hurried back up the dock to let the couple experience the scene for themselves. I hated to leave that place, but in so many ways it has never left me.

This was a piece I wrote a long time ago in an effort to practice descriptions, using different senses, and painting with words. It’s interesting to drop yourself into a painting and try to really experience it instead of simply looking at it. It’s even more interesting to try and record the experience you have when doing this.  I don’t mean simply talking about it though. I feel like it’s so easy to fall into the trap of merely telling our readers what we think instead of showing them, but having an experience yourself is always more engaging than just reading about it. Our task as writers is to use that fact to our advantage and do our best to allow our reader to have those experiences for themselves.

Research suggests that certain parts of our brain are unable to tell the difference between reality and a well-simulated reality. This means that we can make our readers laugh, cry, and be upset over events that never happened. We can even make them fall in love with people who don’t even exist in the real world – but the key is to be able to immerse them in our created worlds. If we cannot learn to master the art of showing, our readers will never be able to fully engage with our writing.

If you want to try this, find a painting that resonates with you and put yourself into it. Make sure you describe what it would be like to be there, not just what’s happening or what you see in the painting. I tried to make mine into a sort of narrative, but that’s optional. Make sure you share your finished product! Don’t be afraid of sharing your work. Not ever piece has to be a masterpiece, and  we cannot create the masterpieces unless we’re willing to sketch and try out new things.

Finally, remember that you do not have to be published to be a great writer. Vincent Van Gogh (the artist whose painting inspired me to write this piece) sold only one painting in his entire lifetime, and yet today he is one of the most well-known painters of all time. He could have decided that his work wasn’t appreciated or worthwhile. He could have stopped painting and done something else with his life, but he loved to paint. He painted for the love of painting. He didn’t let people tell him that he couldn’t achieve his dreams, and he didn’t let his lack of success stop him from trying to achieve those dreams. He is my favorite painter not only because his  paintings move me, but because his unfailing determination to achieve his dreams inspires me to not give up on mine.

The content of this blog may be graphic or otherwise disturbing to some readers. All graphic or disturbing content is included in part to raise awareness of or speak out against hate and self harm.

If you or someone you know is battling suicidal thoughts, please contact the National Suicide Prevention Lifeline.